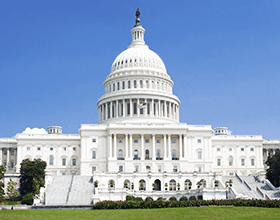 Each year, Congress is tasked with setting budgets across the federal government, including for the National Institutes of Health (NIH), before October 1, the beginning of the new fiscal year. However, this month we passed the October 1 deadline without Congress passing legislation to accomplish this for Fiscal Year 2021. This means that the size of NIH’s budget for the forthcoming year remains uncertain, and that NIH institutes and centers do not know how much research they will be able to support in the coming months.

As we’ve seen over the past several years, if the House of Representatives and Senate fail to agree on a federal budget by October 1st, a stopgap measure, or Continuing Resolution (CR), is needed to prevent the government shutting down. Accordingly, on September 30th Congress passed a CR extending the previous year’s budget and allowing federal agencies to continue to pay employees, provide services, and award grants.  This CR runs out on December 11th, after which it is unclear whether we will see a second CR, a final budget for the year, or a government shutdown. While the CR allows NIH to continue operating, the budget uncertainty threatens to delay the progress of research: it will make it more challenging for NIH’s institutes and centers to fully fund current grants, award new grants or create new initiatives or programs.

Although it has not passed a regular budget, Congress has passed multiple bills containing emergency funds for responding to the COVID-19 pandemic. In recent months, NIH has received $3.6 billion for research and development that support testing, treatment, and vaccines for COVID-19.  Yet, as you know, non-COVID-19 research has been greatly disrupted; NIH Director Francis Collins reported to Congress in May that the pandemic would cost NIH at least $10 billion in lost research.

There is bipartisan support for relief funding for biomedical research, though none of the proposals put forward so far have been enacted. In May, the House passed the Heroes Act, which included $3 billion for NIH to offset the costs of COVID-19-related lab shutdowns and help restart research, as well as an additional $1 billion for new COVID-19 research. The HEALS Act, introduced by Senate Republicans in July as a counterpoint, included $15.5 billion for NIH, of which $10.1 billion would be used to offset research progress lost due to the pandemic. Most recently, as negotiations continued between Congress and the White House, the House passed a smaller version of the Heroes Act on October 1st that retains the $4 billion for NIH.

With negotiations stalled between Republicans and Democrats on COVID-19 related legislation, it appears unlikely that any of the legislation proposed to date will pass, and it remains unclear whether NIH will ultimately receive any emergency funding. It certainly appears unlikely that any such funding will be forthcoming before next month’s elections.  As members of Congress are on the campaign trail, it is all the more important for us all to be contacting our members of Congress, urging them to support emergency COVID-19 relief funding for biomedical research.