Humans and all other living things have DNA, which contains hereditary information. The information in your DNA gives your cells instructions for producing proteins. Proteins drive important body functions, like digesting food, building cells, and moving your muscles.

Your DNA is the most unique and identifying factor about you—it helps determine what color your eyes are, how tall you are, and how likely you are to have certain health problems. Even so, over 99% of DNA sequences are the same among all people. It is the remaining 1% that explains much of what makes you, you!

DNA is arranged like two intertwined ropes, in a structure called a double helix (see figure 1). Each strand of DNA is made of four types of molecules, also called bases, attached to a sugar-phosphate backbone. The four bases are adenine (A), guanine (G), cytosine (C), and thymine (T). The bases pair in a specific way across the two strands of the helix: adenine pairs with thymine, and cytosine pairs with guanine.

Genes are packaged into tightly wound lengths of DNA called chromosomes. Humans have 23 pairs of chromosomes. Sex chromosomes, identified as X or Y, determine whether a person is male or female.

Each chromosome has a centromere at its center, which is a small structure that divides the chromosomes into two parts (see figure 2). Each part is called an arm. Genes are located on the arms of the chromosomes.

Genes: Coding for Proteins and Traits

Genes are small segments of DNA that have different functions. Many, but not all, genes make the proteins that our bodies need to function. You have two copies of each gene, one on each chromosome in a pair.

Genes that code for proteins come in different versions called alleles. Alleles of a gene have differences in the precise DNA sequence. A common example of this is eye color. We each have the same genes for eye color, but different allele combinations within those genes result in different eye colors.

Traits: What Make Your DNA Unique

Traits are your observable characteristics. Many physical traits are genetic. Genetic differences give our bodies information that result in traits that differ from person to person. We can also use genetic information to determine what inherited traits you may have.

A difference from the expected sequence of a gene is called a variant or mutation. Variants can be inherited from your parents, or they can happen spontaneously. All of us have variants, but not all variants are harmful. Variants that are harmful can cause or increase our risk for certain diseases.

Figure 3 below shows a DNA variant where a thymine is replaced with a cytosine. This can cause the gene to produce a different protein that may not function properly. 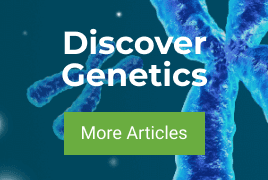