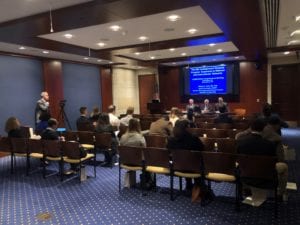 People’s genetic information is increasingly being used for a wide range of non-clinical purposes, such as solving crimes, determining paternity, and exploring one’s ancestry. As research and the increased use of genetic tests reveal ever more about people’s genetic constitution, policies must protect genetic privacy and prevent the misuse of genomic information. ASHG opposes discrimination based on genetic information, such as by employers or insurers, and opposes the use of genetics to justify restrictions on reproductive freedom.

The Society supports the teaching of genetics and greater genetic literacy. This will build public understanding and appreciation for genetics research, the diversity of life, and the role of genetics in health and disease, and also empower people to make informed medical and ethical decisions. The Society also supports inclusion of genetics in medical training and continuing education to consistently integrate translation of research advances into healthcare.

A person’s genome includes information on his or her risk for disease, ancestry, and relatedness to others. ASHG believes that, regardless of purpose, disclosure of this information should be entirely voluntary. Similarly, ASHG believes surreptitious testing of individuals to be unethical, and supports measures that prohibit such testing. In establishing privacy protections, it is critical to avoid imposing undue restrictions on the conduct of genetics research, which is already subject to federal regulations that protect the rights of research participants, including informed consent.

The study of human genetics challenges the traditional concept of different races of humans as biologically separate and distinct. It is important for the research community to continue to contribute new fundamental knowledge to the societal dialog about ancestry, supporting greater diversity in research, continuing to engage the field and public to build genetic literacy, and addressing misconceptions of genetics and ancestry.

ASHG supports policies that ensure that an individual’s genetic information cannot be used against them and has long supported the establishment of strong protections against genetic discrimination. For 13 years, the Society advocated for the U.S. Genetic Information Nondiscrimination Act (GINA) until it was passed into law in 2008, thereby establishing new protections for Americans against genetic discrimination in the workplace or through health insurance. The Society continues to advocate for the robust implementation of GINA, and for similar protections outside the United States.

ASHG opposes laws, regulations, and any other efforts intended to restrict reproductive freedom or to constrain freedom of choice based on known or presumed genetic characteristics of potential parents or the anticipated genetic characteristics, health, or capacities of potential offspring. Such efforts are scientifically and ethically unacceptable.

Genetics is an important part of K-12 education, including patterns of inheritance, gene expression, genetic variation, evolution, and the ethical, legal, and social issues associated with the use of genetic technologies. Children should have the benefit of a comprehensive genetics curriculum. ASHG opposes efforts that undermine the teaching of evolution, or that attempt to establish a false equivalence between evolution and alternative explanations about the origins of life that are not science-based.

Get Involved in Advocacy