The first few weeks of 2021 have brought numerous changes to the federal policy landscape, including the beginning of the new Biden Administration, a new Congress with a Democratic majority in both the Senate and the House of Representatives, and the deadly January 6 attack on the U.S. Capitol and its fallout.  While these events have broad ranging impacts across the nation, several developments in the health and science sphere are particularly notable for ASHG members. 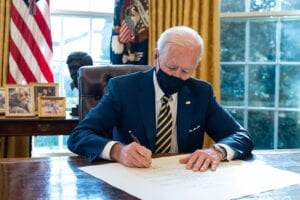 On January 15, then President-elect Joe Biden announced several key members of his science team, including Director and Deputy Director of the White House Office of Science and Technology Policy (OSTP).  Many of Biden’s selections have expertise in the life and social sciences, a departure from past administrations, which have prominently featured physical scientists in key OSTP roles.  Dr. Eric Lander, a geneticist and mathematician, President and Founding Director of the Broad Institute, and ASHG’s 2018 William Allan Awardee, will serve as Director of OSTP and Presidential Science Advisor, a role which has also been elevated to Cabinet-level for the first time in U.S. history.  Dr. Alondra Nelson, Professor at the Institute for Advanced Study at Princeton and President of the Social Sciences Research Council, will be Deputy Director for Science and Society.  Dr. Nelson is an expert in the intersections of science, medicine, and inequalities, and her appointment underlines the Biden administration’s commitment to addressing health disparities and health equity on a broad scale.  Other notable members of the White House science team include Dr. Francis Collins, who will remain in his current role as Director of the National Institutes of Health (NIH), and Dr. Frances Arnold and Dr. Maria Zuber, who will co-chair the President’s Council of Advisors on Science and Technology (PCAST). ASHG applauds the President’s selections for his science team, a positive sign that science, and scientists, will have a core role in the new Administration.

Shortly after his inauguration, President Biden signed a flurry of executive orders on topics ranging from COVID-19 to climate change to racial justice to economic issues. Many of these orders reverse policies put in place by the Trump Administration, including those policies related to immigration that affect international scientists and scholars. These include:

The new Biden Administration is also expected to continue efforts begun during the previous Administration related to science and security. In the final days of the Trump Administration, the White House released two documents providing long-anticipated guidance and recommendations for research institutions and federal agencies to better protect U.S. federally supported research and development against foreign espionage. While the recommendations for research institutions described below are aligned with current thinking regarding best practices, it is not clear whether the Biden Administration will require federal agencies to implement the directions as set out by the Trump Administration.

On the Congressional side, Democrats have narrow majorities (with Vice President Harris’ tie-breaking vote in the Senate) in both chambers for the first time since 2010. Because these margins are so close, it is unlikely that sweeping progressive legislation is likely to be enacted, but there are opportunities for Congress to provide support for President Biden’s agenda in some ways. Initial priorities for the 117th Congress include a large scale COVID-19 relief package to address the most immediate public health and economic needs, as well as a separate package with other long-term infrastructure and economic recovery provisions. Relief for researchers and institutions adversely impacted by COVID-19 shutdowns is one of many items that may be included in one of these deals. Congress will also need to pass appropriations for fiscal year (FY) 2022, including funding for research agencies, before the end of September 2021.