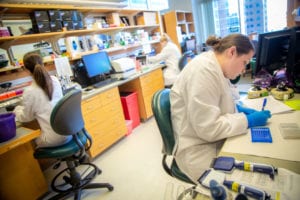 Direct-to-consumer (DTC) genetic testing has allowed millions to directly interact with their genetic data and test results. This presents largely uncharted avenues in which our work as geneticists interacts with the public. A recent example involved a genome-wide association study1 that produced a polygenic risk score explaining <1% of variance in self-reported same-sex sexual behavior, but was nonetheless almost immediately incorporated into an application for interpreting raw data from DTC tests. The app has been removed, but it exemplifies how research can be swiftly disseminated to the general public, even while its validity and ethicality are actively debated in the scientific community.

While genetic test reports often project ancestry assignments onto the modern geo-political landscape, Dr. Chandra discussed how these categories are socially constructed and that individuals have many attributes (cultural, social, genetic and others) that inform their numerous identities. She has published extensively on the formation and evolution of ethnic identities. In her book4, “Constructivist Theories of Ethnic Politics”, she says, “to the extent that the rules of classification that define ethnic identity categories are not objectively given but constructed by human actions, the combination of genetic materials shared by members of an ethnic identity category should be seen as the genetic correlate of the subjectively produced rule of classification, not as an objective basis for that identity.” As an example, she mentioned how being “British” really arose in the 1700s, questioning what it means for someone to be x% British today based on their DNA test results. Given that descriptions of or justifications for the use of race and ethnicity in genetics research are often imprecise5, Dr. Chandra discussed the importance of collaboration between genetic, social, and political scientists.

However, it’s not a foregone conclusion that individuals automatically update their identity given information about genetic ancestry assignments. Dr. Royal discussed results from surveying participants before and after genetic testing, finding that most didn’t experience a change in identity. The responses segregated along two axes: seekers vs. closers, indicating whether someone will seek more information following the test, and confidents vs. skeptics, reflecting the extent to which participants believe their results. She also highlighted work from Drs. Wendy Roth and Biörn Ivemark on the “genetic options” theory6. Through 100 interviews, they found that rather than interpreting all ancestry results equally, individuals selected from results based on aspirational identities, social views and prior racialization. They also found that, compared to Black and Hispanic participants, White participants more readily adopted new identities. Dr. Royal also mentioned Dr. Roth’s recent remarks to the New York Times, saying that given certain genetic test results, White people “can reveal and benefit from that feeling of being unique, exotic or distinctive without having to experience the disadvantage that members of those groups have traditionally experienced.”

How individuals choose to report racial and ethnic identities can also have implications in the clinic. Dr. Bonham described research on the use of race in clinical practice, finding that physicians largely say that race can influence health outcomes, but not all agreed it was the best proxy7. He presented results showing many physicians view race as a biological construct and ethnicity as a cultural construct. He discussed how given that race is used for varying reasons in clinical decision-making, genetics researchers should be prepared to provide guidance in this space as genetic ancestry testing continues to grow.

One notable exchange during the session Q&A involved the determinist language often used in marketing DTC genetic tests, and the challenges that presents when explaining the probabilistic interpretation of ancestry assignment and its distinction from cultural identity. Given that consumer DNA testing has firmly entered the public sphere, I think the genetics research community should carefully consider these varying implications throughout the research process, from study design and analysis to the presentation of findings to the public.