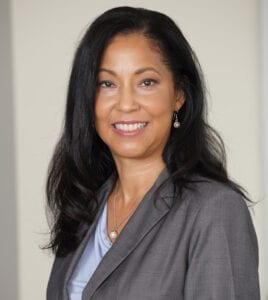 Janine Austin Clayton, M.D., FARVO, is the Associate Director for Research on Women’s Health at the NIH and Director of the NIH Office of Research on Women’s Health (ORWH). Since assuming that role in 2012, Dr. Clayton has strengthened NIH support for research that affects the health of women throughout their lifespan and across the spectrum of scientific investigations. She also leads NIH efforts to advance women in scientific careers. Notably, Dr. Clayton is the architect of the NIH policy requiring scientists to consider sex as a biological variable (SABV), a part of NIH’s initiative to enhance reproducibility, rigor, and transparency.

In addition to her senior leadership position, Dr. Clayton is a board-certified ophthalmologist. She served as a Clinical Investigator and Deputy Clinical Director at the National Eye Institute for a number of years. Dr. Clayton is a recipient of numerous awards and honors. She is a proud graduate of Johns Hopkins University and the Howard University College of Medicine, where she earned her bachelor’s and medical degrees, respectively.

Recognizing March celebrates both International Women’s Day and Women’s History Month, ASHG interviewed Dr. Clayton who shares more about the value of interrogating genetics in support of better women’s health, as well as her experiences in science and life.

ASHG: Reflecting on your tenure at the NIH, what have been rewarding aspects of your career?

Clayton: A rewarding part of my career has been the pleasure to work with committed people who are willing to come together on a journey to promote the health of all populations of women through scientific research and policy. I recognize that this important work changes the way science is able to be done. Earnest efforts and partnerships have contributed to significant progress in this area of women’s health.

For example, results from the NIH Common Fund’s Genotype-Tissue Expression (GTEx) program, which established a data resource and tissue bank to study the relationship between genetic variants and gene expression, have found that over 13,000 genes are expressed differently between males and females. Discoveries such as these are foundational in the pursuit of personalized medicine.

Another rewarding body of work was the creation and launch of the U3 Administrative Supplement Program, which targets interdisciplinary research on populations of women that are understudied, underrepresented, and underreported (U3) in biomedical research. The U3 program focuses on the effects of sex and gender influences at the intersection of several social determinants—including race and ethnicity, socioeconomic status, education, health literacy, gender identity, and urban/rural residence. Moreover, these studies aim to address health disparities among U3 groups of women.

Clayton: Fortunately for me, I had several role models. First, I would say my parents modeled for me the value of working hard and being and doing my best. My father was a physician at Freedmen’s Hospital—the first hospital of its kind to aid in the medical treatment of formerly enslaved people. This hospital, founded in 1862 and located in Washington, DC, would become home to my academic training as a medical student at Howard University Hospital.

I recall being surrounded by scientific excellence while at the Howard University College of Medicine. My teachers were trailblazers in science and society. A couple of these dynamic role models include Dr. Vivian Pinn (the first African American woman to chair an academic pathology department in the U.S.) and Dr. LaSalle D. Leffall Jr. (the first African American to serve as national president of the American Cancer Society and the American College of Surgeons).

Unforgettably, Dr. Leffall instilled in me, and so many of his students, a motto and desirable quality of “equanimity under duress”—the ability to maintain calmness and tranquility in any situation, which allows a person to do what is appropriate no matter the circumstance.

ASHG: Why is it important to have a diverse and inclusive scientific workforce?

Clayton: Diversity, equity, and inclusion have been a unifying theme of my professional life as a woman of color, physician, and science executive. Thus, through my lens, it is crucial that we have a diverse and inclusive scientific workforce. The purpose of science is to generate knowledge. We then turn that knowledge into action. If we don’t have diversity and inclusion, we are profoundly limited. Besides the importance of diversity and inclusion benefiting scientific endeavors, we do have a moral imperative to eliminate barriers and to promote equity and fairness.

Thank you, Dr. Clayton, for your perspectives. Researchers across our genetics and genomic ecosystem can learn from your experiences and efforts to promote women’s health research within and beyond the NIH scientific community.