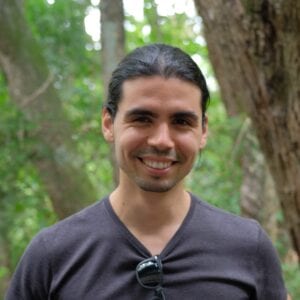 The indigenous populations of the Americas were largely wiped out as European nations colonized the continents. How can we learn about these populations and the historical peopling of countries like Brazil? In this month’s Trainee Paper Spotlight, Castro e Silva et al. use current genomics technologies to uncover the origins and migration patterns of the Tupí population that existed in historic Brazil. Using genomic data from the existing Tupiniquim population in Brazil, they reconstruct ancient migration patterns of the Tupí civilization that settled along the Brazilian Atlantic Coast around the 15th century, prior to European occupation. Thus far, only archaeological, ethno-linguistic, and paleoenvironmental data have existed to understand and propose hypotheses for the so-called “Tupí expansion” from the Amazon and the origins of the Guaraní and the coastal Tupí lineage. Through genetic analyses, they are able to demonstrate that the existing Tupiniquim population is the only known living representatives of the now extinct Tupí branch. Their analysis shows that the genetic data supports a two independent migrations model – one directly from the Amazon to the coast to form the coastal Tupí populations and another to the south to form the Guaraní people of Brazil and Paraguay. This study demonstrates the power of combining genomics analyses of modern populations with traditional anthropological studies to more accurately and reliably trace the history of ancient populations that have been lost due to European colonization.

Mr. Castro e Silva: My research aims to study the genetic diversity and ancestry of Brazilian populations, especially of indigenous communities, and to illuminate how they are shaped by factors such as population history, geography, and culture, taking into account the framework of historical, archaeological, and ethno-linguistic knowledge.

Mr. Castro e Silva: I intend to continue doing research in the area of human population genomics, with a special interest in Brazilian and Latin American populations and I will seek positions that allow me to pursue this purpose. I also want to gain international experience and to engage in more collaborative work in the field.

Mr. Castro e Silva: I have always had multiple interests. For me as a biologist, genetics was, and in fact is, the unifying field, which allowed me to follow some of these themes of interest. I am also fascinated by the power of genetics to elucidate the past and explain the present, integrating with the knowledge from other fields.